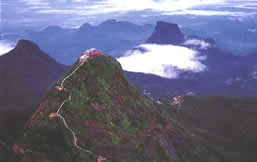 This is not the highest mountain of Sri Lanka but the striking pyramid of Adam’s Peak is 7,360 ft of high and a remarkable mountain. A depression in the rocky summit resembles a huge footprint, which has been venerated as a sacred sign from remote antiquity. This was identified by Buddhists as the Buddha’s footprint, by Hindus as that of Shiva, and by Muslims and Christians as Adam’s.

The Mahawansa tells how the sacred footprint was imprinted by the departing Buddha on his third visit to Lanka, but the site did not become an object of regular Buddhist pilgrimage until the Polonnaruwa period, when Vijayabahu I built resting houses for pilgrims and King Nissankamalla himself, in the year 1201, climbed to the top and worshipped the spot.

We check you into a comfortable Guest House in the base camp village of Dalhousie for an early dinner and some rest before a 2am start on the 5,200 floodlit steps (lined with small  tea/snack shops in season) to reach the summit around 6am in time for the spectacular shadow pyramid that forms at sunrise (weather dependent). Then some time to see the mysterious giant footprint before heading back down for a late breakfast and freshen up!
Learn More About Sri Pada – Adams Peak: http://sripada.org/
Previous Post Sri Lankan Culture Next Post TEMPLE OF TOOTH RELIC